DOS Viewer automatically associates with NFO and DIZ files, so you can simply double-click them to view them with DOS Viewer.

I stopped the development because there are too many different chipsets and hardware monitoring chips. There are other programs that can handle them. One of them is Motherboard Monitor (which I don't like). I released full source code (developed in Borland Delphi 3, then 5 and this beta compiled in Delphi 6 Personal). To build HwMon, you need TTrayIcon and TDlPortIO coomponents. 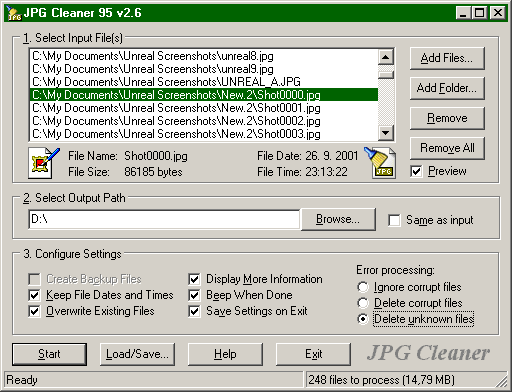 All this data is useul only when opening the file in program that created it. Other programs such as Internet Browsers are just skipping this data, so the data is downloaded ant then thrown away! Just use this program when publishing JPG files on the Internet and your JPG files become smaller (if they contain non-picture data) with NO QUALITY LOSS.

The Win32 version is easy-to-use. Step-by-step instructions are included in the readme text and help file.

Please report any bugs to: rainbow@rainbow-software.org

UniFlash (Universal Flasher) is program created by Pascal Van Leeuwen and Galkowski Adam. It was abandoned in 1998 (v1.17b). It was almost dead project, but it LIVES AGAIN NOW! UniFlash supports a wide range of chipsets and Flash ROMs (read uniflash.txt for a list, it's also included in the ZIP package). Since v1.40, UniFlash is licensed under GNU GPL v2.
Warning: This program is for experienced users ONLY. Improper use of this program (when you flash a WAV file instead of BIOS image to your Flash ROM) or bug in the code (especially with untested hardware) can cause your motherboard to not work. If you do this, I AM NOT RESPONSIBLE for that (original authors aren't too, YOU ARE). To make your motherboard work again, you need to hot-flash your Flash ROM or use external Flash ROM programmer.

You can have a look at BIOS Forum at Wim's BIOS Page: http://www.wimsbios.com/phpBB2/.

For complete revision history, read the uniflash.txt file (it's also included in the ZIP package).

If you want to try it, download the executables. If you want to help with development of this program, download the sources. UniFlash is written in Borland Turbo Pascal (use TURBO.EXE for debugging, not TPX.EXE because UniFlash uses flat real mode). If UniFlash can't detect your chipset or Flash ROM type, please report the motherboard manufacturer and model, chipset and Flash ROM to the following address:

Please report any bugs or unsupported hardware to: rainbow@rainbow-software.org

How to install Windows Media Player 7.1 on Windows 95 and NT - look here.